In operation since 1996, TriCounty Link continues to research, plan, and implement affordable service improvements that provide access to jobs, medical facilities, schools, and shopping for our rural customers in Berkeley, Charleston and Dorchester Counties. 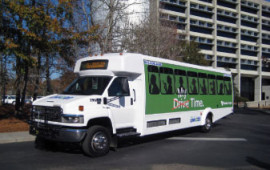 Transit displays go where people live, work and play. They reach all income levels from the CEO to the assistants

assistant – providing total market penetration that often cannot be reached by traditional media. Your message will be seen by motorists behind and beside the bus, often in stopped traffic, and pedestrians will notice your ads, too.

TriCounty Link buses are clean and well maintained to present the best possible venue for your message. Link buses travel through most of the geographic areas of Berkeley, Charleston and Dorchester Counties. They expose your message to people in commercial and industrial areas, large and small shopping malls, entertainment centers and more. 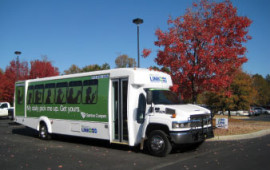 Whatever your promotional needs, let TriCounty Link buses do the advertising work for you. Advertising on the Link is the cost-efficient way to deliver your message to the masses, with larger-than-life messages that people simply cant ignore.

TriCounty Link prides itself on being a service-oriented public agency that connects people to the places they want to go. Ridership doubled during the five-year period between FY 2004-2005 and FY 2008-2009, with the largest annual increase of 38 percent occurring between FY 2007-2008 and FY 2008-2009. TriCounty Link has experienced an overall increase of 4 percent during the period FY 2008-2009 and FY 2009-2010, with the largest increases occurring on the Commuter Solutions Routes.

Increases are attributed to several factors, including greater public awareness about the service, the success of the Commuter Solutions routes, and the publics willingness to embrace public transportation as an affordable and pleasant alternative to sitting in traffic. The TriCounty Link staff works very hard to keep our customers satisfied by listening to their suggestions and comments and continually telling them that their choice to ride on TriCounty Link buses is appreciated.