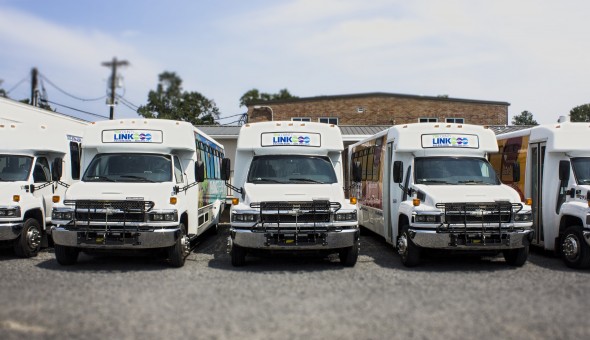 The TriCounty Link system is comprised of 11 regular fixed routes and 5 commuter routes that provide services to rural residents of Berkeley, Charleston and Dorchester counties. While each of the eleven fixed routes follows a published schedule, each route also includes a route deviation option. The driver may go off the fixed route up to one-quarter mile to pick up customers that cannot meet the bus at designated stop locations. We are also a flag-stop system and will pick up customers between the scheduled stops along each of the fixed routes.

The current fleet consists of 29 vehicles that seat from 14 to 22 passengers. All TriCounty Link vehicles are ADA compliant and include wheelchair lifts, and on average, two wheelchair tie-down positions per vehicle.

Fixed-route fare-paying passengers are required to pay the standard fare for each trip. The current fare for all TriCounty Link routes is $2.25 per trip. Customers may purchase a weekly pass for $18 or a monthly pass for $70.

In 1996, Berkeley, Charleston and Dorchester Counties agreed to invest in the cost for the startup of a rural transit service for the residents of the region. The Berkeley, Charleston, Dorchester Rural Transportation Management Authority (BCD-RTMA) was created to operate this service. The BCD-RTMA service was implemented to provide a home-to-work option for rural residents with an investment of just $30,000 per year per county. The funding from the three counties was programmed to last only three years, after which we were tasked with becoming self-sufficient. Over the past thirteen years the BCD-RTMA has succeeded in becoming independent through various service changes and by providing contract service to several agencies throughout the region. Until the half-cent sales tax was approved in Charleston County, the BCD-RTMA had not received funding from any of the counties in the region since its initial start up.

In late 2007, the Berkeley, Charleston, Dorchester Rural Transportation Management Association (BCD-RTMA) changed its operating name to better describe the service it provides and to be more visible in the communities being served. Since being established, our system has grown from a single-county service to one that is taking on the challenges of serving three counties more effectively. Founded on the premise of being self-sustaining, TriCounty Link celebrated its 13th birthday in July 2009.

Recognizing the importance of creating a more seamless transportation network, TriCounty Link management approached the Charleston Area Regional Transportation Authority (CARTA) board of directors and requested approval of a transfer agreement that would allow customers to pay one fare each way when transferring between the rural and urban transportation systems. The transfer agreement was implemented in January 2007 and has been very successful.